The Malerweg is one of the most famous trails in Germany. It is located in the Saxon Switzerland (Sächsische Schweiz), eastern part of Germany. The Malerweg has a distance of around 112km and shows you the beauty of the so called Elbe Sandstone Mountains. This route is mostly located in the National Park Saxon Switzerland. The landscape has secluded valleys, imposing table mountains rising out of the flatness and dense forests.

The Malerweg or Painters’ Path follows the tracks of the Romantic painters through the Saxon-Bohemian Switzerland and is based on the historical standard route from the beginning of the 19th century.

Stages of our tour Malerweg in Germany, October 2020

Traveling by car to Pirna we spent a night in the Casa Hostel (dorm room 25 € each). The cozy hostel is located in the immediate vicinity of the bus station, where you can park the car for free. We started the other day at 10am with the bus line G/L Pirna-Liebethaler Grund. The Malerweg begins at the entrance of the Liebethaler Grund, along the Wesenitz stream, to the Daubenmühle, past the Richard Wagner monument and the remains of the former Lochmühle. On the old Lohmstraße we went through villages and forest paths and arrived in the Uttenwalder Grund with the famous Felsentor. Rock formations line the Malerweg to the city Wehlen. The historic Elbe town offers some opportunities to linger, but we decided to descend on the Schwarzbergweg that early afternoon. At the picnic area Steinerner Tisch we took a break and ate delicious cakes. The Malerweg was now heavily frequented in the immediate vicinity of one of the most famous sights of the Elbe Sandstone Mountains, the Bastei. From the Bastei bridge and the surrounding views, we had a fantastic view of the landscape, accompanied by beautiful autumn weather. Over steps we climbed down the Basteiweg into the Amselgrund past the Amselsee, to the Amselfall and then to Rathewalde. It was 6pm and outside of the village with distant views of the region, we found a place for our tent. A happy first day of the Malerweg

At 6:30am we suddenly awakened by diligent farmers who also worked their fields on Sunday. The crossroads took us parallel to the street direction Hocksteinparkplatz. For 10 € per person, there was a sumptuous breakfast in the Hocksteinschänke. From there our hike continued in the most beautiful sunshine to the Hockstein and we climbed over steps to the Wolfsschlucht down into the Polenztal. Green mysteries valleys characteries the Malerweg. Up to Hohnstein the trail went down again in the bear garden. There we followed the old wall remnants on a forest hiking trail. After a lunch in Brandbaude, with fantastic panoramic views, we went down from the balcony of the Saxon Switzerland, over 800 steps into the Tiefen Grund. The Malerweg now led back up to Waitzdorf. From the Waitzdorfer Rundweg we hiked through the Dorfbachklamm along the Malerweg down into Kirnitzschtal to the campground Ostrauer Mühle. Day’s destination reached!

The Ostrauher Mühle campsite is open all year and we have paid 20 € for our tent. After breakfast, we started the Malerweg the day at 9am. Straight uphill over the Mühlweg and Bauweg on the Elbleitenweg to the Schrammsteine, an elongated, heavily rugged rock group. After the imposing Schrammtor, the Jägersteig-climb led up on iron ladders up to the Schrammsteingratweg with the Schrammstein prospect. We walked through the small dome to the sand hole via the back road. On the Zeughausweg and the lower Affensteinweg you reach the Lichtenhainer waterfall. Finally a well-deserved coffee break with cake and relaxation in an old-established restaurant was a good deal. Here, the Malerweg runs from the Lichtenhain waterfall up to the imposing rock cave Kuhstall on the new Wildenstein, with Himmelsleiter. The path brought us down again into the valley to the historic Neumannmühle, further along the road the Kirnitzschtal upriver to the Buschmühle. You have to sharply turn left in the direction of Arnstein over the new path to the branch Kleinsteinhöhle. The Malerweg leads above the road over a clearing. There we have found a good place for the night. We set up the tent while dusk. Delicous dry food dinner was prepared and we listened to the animals of the forest under a full moon shining through the night.

At this beautiful autumn morning we hiked up to the summit of the large Winterberg (556m). In between, the Goldstein view offers a beautiful panorama over the basin. On the Winterberg, the second highest mountain in the Saxon Switzerland, we had lunch and after that went down the Elbe Valley to the village Schmilka. You can stroll around this idyllic border town to Bohemia (Czech Republic) with beautiful half-timbered houses. A ferry (1.50 € p.P.) brought us in just a few minutes to the other side of the river Elbe. From now on you walk downstream on the left side of the river Elbe. On the Caspar-David Friedrich Rundweg the historical views of his famous paintings are clearly comprehensible. Impressive is the panoramic view on the Wolfsberg. The path then led us to Reinhardtsdorf with its worth seeing church, designed in peasant Baroque style. In the middle of the basin between Krippen and Kleinhennersdorf we passed the Liethenmühle. This watermill is one of the best-known mills in the Elbe Sandstone Mountains and is located directly on Malerweg. Unfortunately, everything was booked for this night. It started to rain and slowly got dark, so we found a place for us and our tent outside of Kleinhennersdorf.

Roused by the rain, we quickly packed up and walked on towards Pabststein. Hiking the Malerweg means among many other things you gain lot of altitude. Through the narrow eye of the needle and a steep climb over wood and iron stairs we reached the Pfaffenstein. The route now points to Königsstein. Due to time constraints we did not go to that former fortress (10 € p.P). In the cafe Sachsenhof on the market square of Königsstein, we instead had a long break. Continuing along the foot of the fortress we came through Thürmsdorf. At the castle of Thürmsdorf is a chocolate factory with a nice café. After a second break our hike went on along the edge of the forest, past the Malerweg chapel, a former mausoleum, with a magnificent view to the Königstein fortress. In the evening we pitched our camp on the imposing Rauenstein. An incredible scenery, the view of the table mountains, down to the Elbe Valley and on the opposite bastion, a really magnificent panorama. With our headlight on dinner was prepared and served. Watching the stars, remembering all the movements and sights you know why you´re here at this specific place!

We woke up before sunrise. A nice moment for taking pictures. Today is the last stage of the Malerweg. The time on the Rauenstein was something special, a glorious sunrise. Over the ridge we hiked to Wehlen-Pötzscha and from here to Naundorf. In the village center of Naundorf the Malerweg led us past the upper edge of former quarries to the Königsnase. The path through the autumnal mixed forest was sometimes quite difficult. After a distance of almost 3 kilometers we reached the so-called Königsnasen prospect. Unfortunately, the view is already overgrown, so that you can only see the river Elbe through a smaller gap downstream. At this view, the end of the path along the edge is reached and it goes down a few steps down the slope to the Elbe. Once in Obervogelsang you follow the Elberadweg in the direction of Pirna and turned left up to get on the Canaletto path. Our destination for the day and the end point of the Malerweg was the Canaletto House on the market, right in the historic center of Pirna.

For more information about the Malerweg – Germany don´t hesitate to contact us. Feel free to watch our videos on YouTube and explore our other trails we´ve experienced for you!
Take care and go out and make it happen! 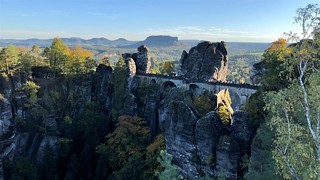 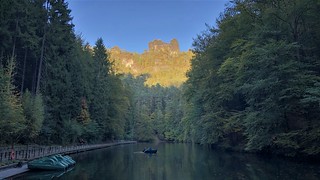 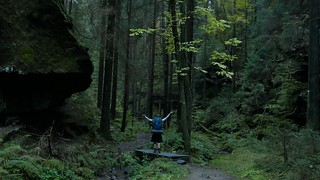 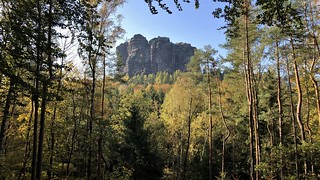 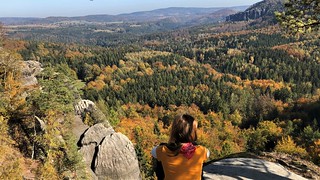 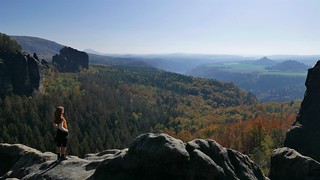 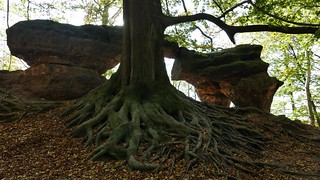 Nature art -near the Malerweg 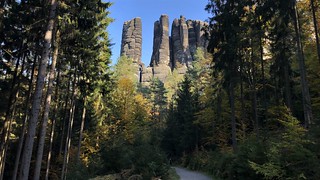 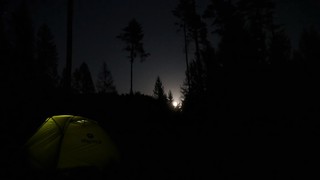 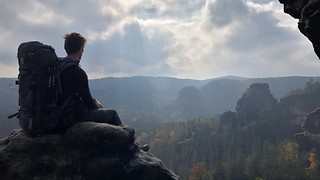 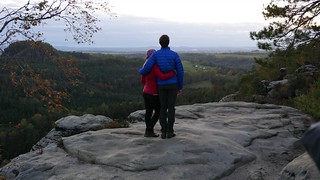 We enjoy the silence 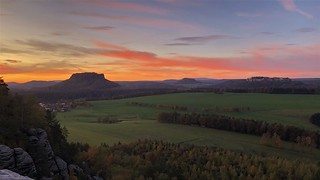 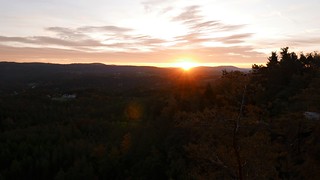 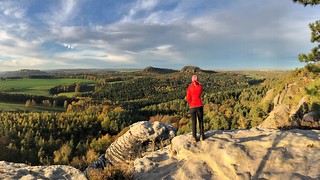 Two trail lovers. One dream. Hiking What is your g

Sky, sea & mountains - what do you need more? Isle

Keep going or having a Break? . . #julianalps #jul