The Winterberger Hochtour with the distance of 85km explores the area around Winterberg. You need to be in good condition to tackle the highest peaks (843m) in Sauerland. The Winterberger Hochtour (Winterberg High-Altitude Trail) starts and finishes on the Kahler Asten mountain in NRW. In between, it crosses the highest peaks in Upper Sauerland, traverses valleys and takes in cultural highlights and unspoilt nature.

Hikers can explore the spring of the Lenne and North Rhine-Westphalia’s most extensive mountain heath in the Neuer Hagen nature reserve. Part of the Winterberger Hochtour trail leads along the ridge of the Rothaar mountains and past the mountain villages of Langewiese, Neuastenberg and Lenneplätze. The Winterberger Hochtour has been certified with the “Qualitätsweg Wanderbares Deutschland” seal of quality by the German Hiking Association (DWV).

Stages of our Winterberger Hochtour -- Germany, May 2017

Arrival by car in Winterberg. Free parking is available. We started the Winterberger Hochtour at 1pm. You follow a marked paved forest road down to Renautal. The idyllic valley is a water-rich region, we have unexpectedly even seen one of the rare black storks.
The pretty village of Siedlinghausen has a lovely church in the town center. Nearby we had a coffee and cake served by ourself, so that the remaining day distance could be mastered.
We crossed the Hochsauerlandstreet and went along the fences and meadows out of the village. Luckely we had a pizza earlier that late afternoon, because of that really bad storm that followed. A short distance away from the village we found the shelter “Burbecke”. We set up the tent and it became our camp for the night.

After a rainy night, we started our Winterberger Hochtour on a sunny morning, up to the highest mountain in Westphalia, the Langenberg (843m). We had to look at our map (internet printout) regularly to find the way up to the Hochheide. The high heather (Nature conservation area “Neuer Hagen”) is the largest and also the highest heather area in our country. A morning coffee at a sunny table in the “Hochheider Hütte” was a good start into the day. The path leaded past the Diabassteinbruch. We had a warm meal at the Gasthof Müller (restaurant) later on. After that lunch we had to follow the signs “WHT” steeply up to the saddle between Rösberg and Alte Grimme (681m). We followed the route on the Elkeringhauser Historical trail to the pit misery. As the name suggests, it is an abandoned mine. The rest of the day we headed through the forest and later on we thought the Ehrenscheider mill would be a place to stay. But this is only a parking lot. Finally a shelter at the “Franzosenkreuz” was a good place for our tent and an idyllic location above the village “Züschen”.

We descended via the southern slope of the Ikesberg. We walked zig-zag into the pretty village of “Züschen” with well-kept half-timbered houses. Below St. John’s Church, we had an overpriced breakfast in a little hotel. The Hackelbergweg leads and continues uphill on the Ziegenhellenplatz through the ski resort Homberg. The lookout tower offers a beautiful panoramic view. The Winterberger Hochtour now followed the Hochsauerlandkammweg and we reached over the Osterkopf the evil wood with a Schnadestein.
In the forest village “Mollseif” we arrived in the afternoon, a coffee break with a delicious fruit cake was urgently needed. Strengthened we crossed the highway and hiked in steep serpentine following the mark, on the other side up to the ridge of the Rothaasteig (740m). Finally we arrived in “Langewiesen”. Looking for a place to sleep and something warm to eat, we came across the inn “Astenblick”. This pension is a bit old and is located on the main road, but it is inviting.The owner was very hospitable and her goulash bohemian style was delecious. The prices were very fair compared to other localities.

After a hearty breakfast we went to the Astenberg under a beautiful morning sun. The biggest challenges of this Winterberger Hochtour were behind us. The branch tower is the highest building in NRW, the view extends in clear weather over the entire Rothaargebirge. Past the Kahler Asten (840m) the most famous mountain in the Sauerland, the city of Winterberg was the end of our Winterberger Hochtour. A well-deserved lunch in a pizzeria was a relaxing ending.

For more information about the Winterberger Hochtour -- Germany don´t hesitate to contact us. Feel free to watch our videos on YouTube. and explore our other trails we´ve experienced for you!
Take care and go out and make it happen! 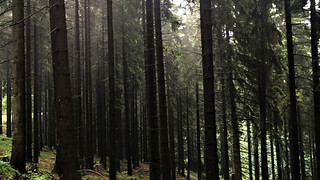 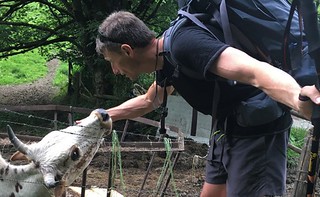 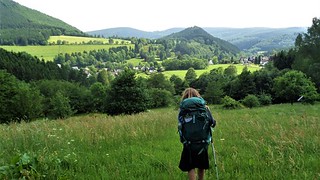 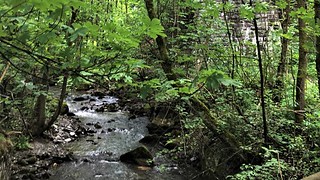 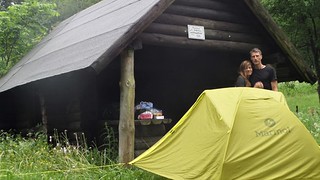 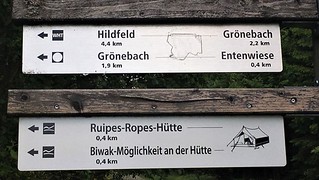 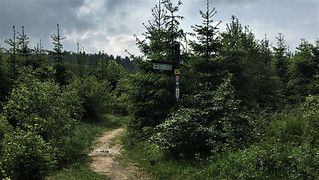 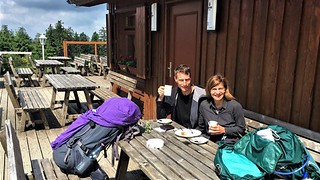 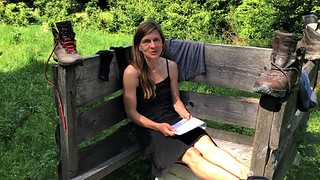 Having a rest in the afternoon sun. 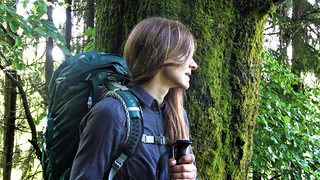 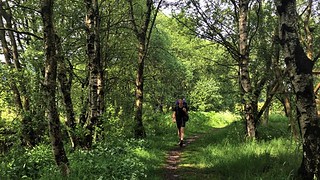 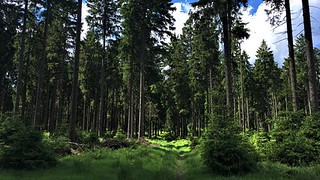 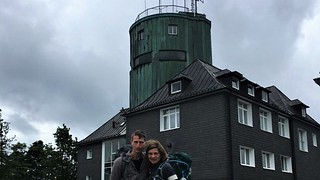