The E1 path runs in Germany mainly on regional or overland hiking trails. Sections of attractive trails like the Heidschnuckenweg. The total length of the path in Germany is 1830 km. On our section from Buchholz i.d. Nordheide to Celle the E1 is well marked with the St. Andrew’s cross.

We hiked a total distance of 136 km. For the most part the E1 European long-distance path running together with the Heidschnuckenweg. The E1 path passes through some of the most attractive landscapes in the Nordheide and Südheide. The dominant element in this section are the pine forest trails, on which the E1 path runs mainly here. Hiking through the heather areas is a great experience you shouldn´t miss.

We arrived Buchholz by train in the morning. In Buchholz center is an information board there. The E1 path is marked with a white cross on a black background. The weather was cold, dry and sunny. Shortly after Buchholz we reached Brunsberg (129 m). The E1 continued to take us near the Seeve spring and finally into the Lüneburg Heath nature reserve. In the afternoon we came through the picturesque Büsenbach valley just before Handeloh. The E1 mostly runs together with the Heidschnuckenweg, we had a beautiful view of the charming heathland of the North Heath, with numerous spring bloomers. We reached our daily goal around 7:00 pm. The dominating element of this stage are the easy forest trails. Shortly before the place Undeloh we found an inviting place under old oak trees for our tent.

A cold night and it actually snowed. We slept with a down jacket and hat. Undeloh is a small tourist place. Except for a small gift shop, everything was closed due to the Corona Lookdown. The Wilseder Berg with 169 m height is the highest elevation of the Lüneburg Heath. Continuing through an old avenue of trees, we passed the Totengrund valley. In Bispingen we filled up the water supplies in a supermarket and supplied ourselves with food.
On a very long forest path along a disused railway line, the E1 led us to the Luhequelle and past the Lönsstein to Müden. After 27 kilometers that day, we found an acceptable place for our tent in a clearing just before Stübeckshorn. At night we could hear the rustling of the pine trees.

Another cold night with temperatures below zero. After breakfast we moved towards Soltau, alternating between forest and paved paths. Meadows and fields alternate. After 10 km we arrived in Soltau. Soltau is the largest city in this region, but this place seemed sleepy, the result of the Corona crisis. Fortunately, a supermarket had opened here under certain conditions. Unfortunately there was absolutely no refreshment stop. We enjoyed our break on a bench in Böhme Park. In this city park, several signs of hiking trails combine to form a soup of letters. The E1 is not clearly recognizable, we got lost here and found the route with detours. The river Bohme leads us out of Soltau to Tetendorf. Shortly before the B3 road, before Bockel, we found a camp for the night in a pine forest. After cooking, we went into the sleeping bags early.

This night was cold too, but without frost. We heard the sound of forest workers and were woken up by them in the early morning. After a short distance we arrived in Wietzendorf, where there are good shops (supermarket, pharmacy, bank). A few kilometers later we met a typical Südheide sandy path that led us straight to the seven-armed signpost. From there it was not far to the Wietzer Berg. There is the Hermann Löns Monument, a real tourist magnet. We pass the town of Müden and follow the river Örtze to the town of Hermannsburg. Arrived at dusk, tired and hungry, we mobilized the last reserves. Strengthened with Pizza to go, we found an acceptable tent opportunity outside of Hermannsburg, at the Misselhorner Heide rest area. With the help of our head lamps and the routine, we were able to set up our night camp without problems.

After our beloved breakfast with oatmeal and coffee, the E1 path led us in a large arc through the Misselhorn Heath and then near the Dehningshof (Alte Fuhrmannsschänke) to the Alte Celler Heerstrasse. Extensive heathland and gentle hills alternate. On the wide sandy paths we finally came to the Wildeck ponds, an idyllic place that invites you to linger. The rest of the way to the Scheuen district of Celle is rather boring and is characterized by long straight sections through sandy coniferous forest. After 28 km behind the village of Scheuen at the glider airfield we finally found a place for our tent at the edge of the forest. Wild camping isn´t a big problem, nevertheless most of the land is privat. Therefore it is advisable to stay invisible with the tent.

The next morning the trail went straight to the historic city of Celle. The last 3 km lead to the beautiful city center with its many half-timbered houses. In the city center, the Celler Castle, majestically rises in the castle park, surrounded by a moat. The goal is reached! There is much more to the nearby old town than just a cup of coffee, but due to the Corona crisis, everything is very limited. From Celle we hit back to Osnabrück by train via Hanover.

For more information about the E1 European Long distance path -- Lüneburger Heide don´t hesitate to contact us. Feel free to watch our videos on YouTube and explore our other trails we´ve experienced for you!
Take care and go out and make it happen! 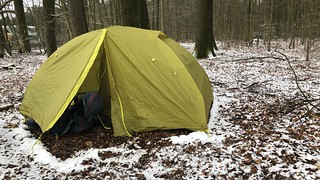 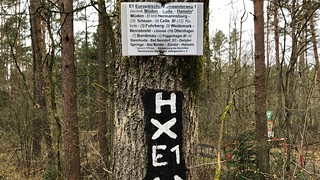 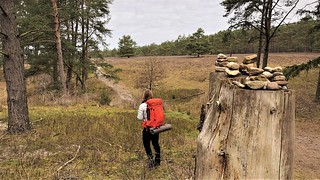 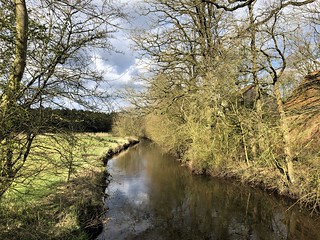 Crossing the Böhme near Imbrock. 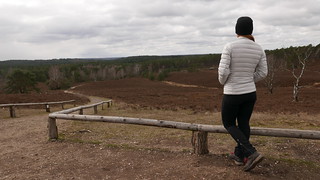 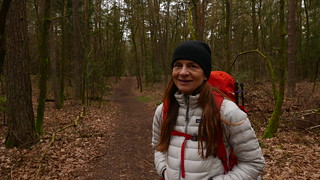 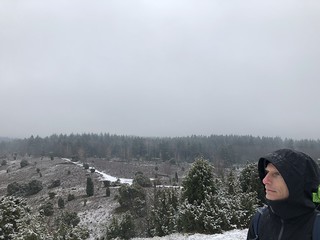 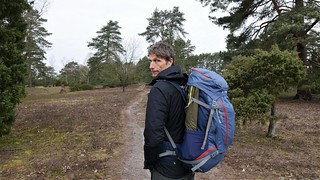 Stefan on the trek 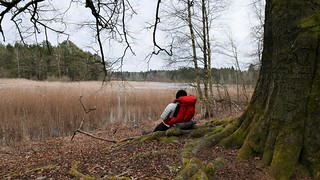 Rest near the Wildecker Teiche. 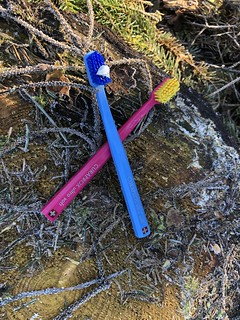 Ready to brush the teeth. 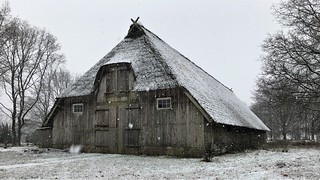 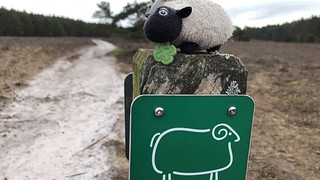 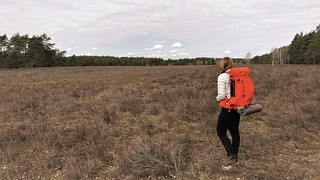 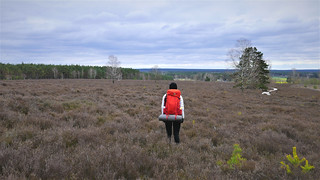 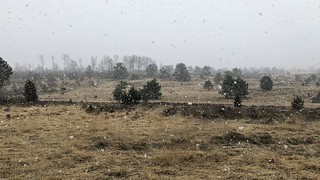 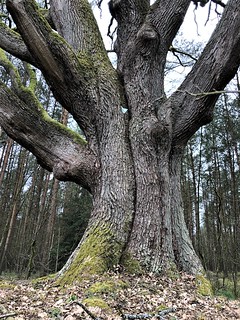 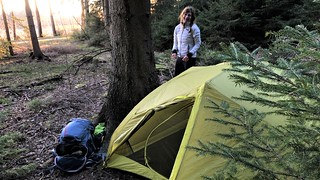 Lührsbockel, 3. stay in a forest. 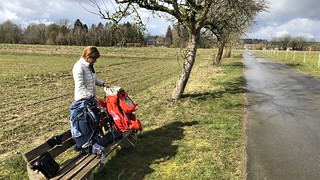 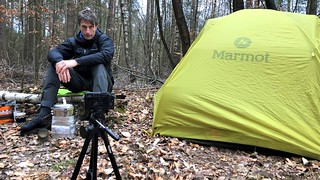 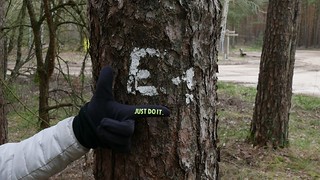 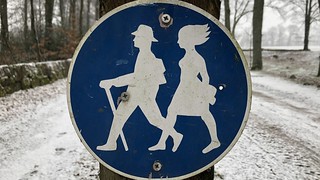 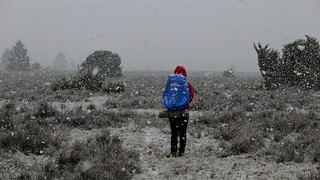 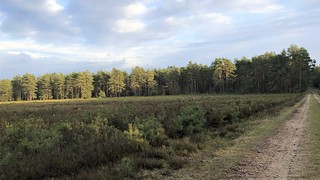 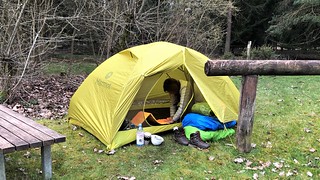 Getting ready for the day, Misselhorner Heide. 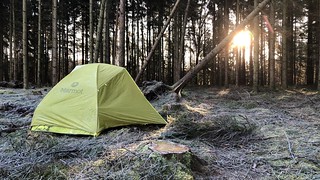 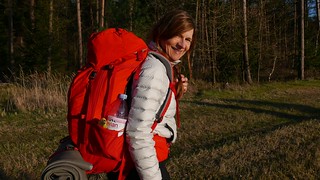